Cavaliers of the Dakota Frontier

In the 1850's, the American West was ablaze with land speculation. From Minnesota to Kansas, town site companies eagerly sought out the most desirable locations for new towns, taking advantage of an 1844 Act of Congress. This generous law was the impetus for ambitious men to create companies and send exploration parties into the prairie wilderness. Among the new breed of speculators were men from the Dakota Land Company from St. Paul and the Western Town Company from Dubuque, who later joined forces. Their sights were set on the Falls of the Big Sioux River. A rival company was organized in Sioux City, Iowa, with designs on the Yankton Sioux Indian village on the Missouri River slope. The two groups were soon locked in a fierce rivalry over the control of the political and economic destiny of wild land which all men considered to be the next bonanza. These men possessed a hazy vision to go with a haughty attitude and were risk takers, but they used the federal government fully and freely, counting on Uncle Sam to provide money, jobs and military protection. Both pushed and implored Congress to create a new territory. Impatient in the extreme, they set up their own extra-legal forms of government, hoping that Congress would take note. Their timing was bad, however, for the Panic of 1857 set in motion an economic downturn. This was followed by Indian attacks on the settlements and by the Civil War that distracted the attention of Washington, D.C. While Dakota Territory was created in 1861, development of towns was slower than the speculators expected and the great fortunes that were dreamed of never materialized. This book is a series of inter-connected essays and each essay is a narrative within a larger narrative. It features photos and illustrations never before published, a bibliography, and a comprehensive index to full names, places and subjects.
Softcover, Heritage Books, Inc

Title: Cavaliers of the Dakota Frontier 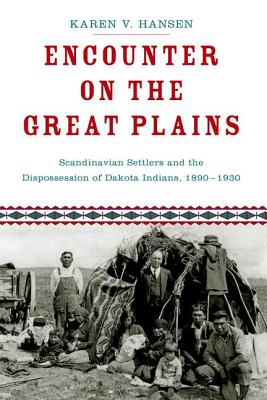 Encounter on the Great Plains: Scandinavian Settlers and the Dispossession of Dakota Indians, 1890-1930