In 1913 the U.S. Forest Services started buying privately owned land in order to create the Chattahoochee National Forest. Because of unclear titles, it was necessary for the federal government to acquire much of this land through court proceedings. This book is a compilation of names, family relationships and other information found in the records of those proceedings. The titles to most of the lands were found to be so poor that proceedings of condemnation had to be taken to the Federal Court before good titles could be obtained. The condemnation process required that an attempt be made to locate all parties who might have an interest in or claim to the land in question. The genealogical data this process produced is invaluable to the researcher. Information was accumulated that has not been found in any other records to date. Most of the transactions affecting the Land titles occurred in an earlier era and heirs of the deceased landowners were sought. Both the maiden and married names of many female family members can be found. The addresses of those who moved away also offer possible migration locations for family members. Although the land involved in this book is almost totally located in Rabun County, Georgia, the parties listed are located all over the United States, from California to New York and from Montana to Florida. Anyone who has ancestors in the early 1800s who lived in the tri-state area of Georgia, North Carolina, and South Carolina would be interested in the information contained in this book. Over 6,000 names arranged in up to six generations of family genealogies are listed. Married names fro females are included, as well as county and state of residence for most individuals. Contains a fullname index.
426 pages, 5.5x8.5, (2001), 2007, 5.5x8.5, paper, index, 426 pp, Softcover, Heritage Books, Inc 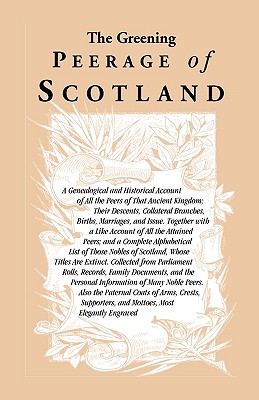 The Greening Peerage of Scotland: A Genealogical and Historical Account of All the Peers of That Ancient Kingdom; Their Descents, Collateral Branches, Births, Marriages, and Issue. Together With a Like Account of All the Attained Peers; And a Complete Alphabetical List of Those Nobles of Scotland, Whose Titles Are Extinct. Collected From Parliament Rolls, Records, Family Documents, And the Personal Information of Many Noble Peers. Also the Paternal Coats of Arms, Crests, Supporters, and Mottoes, Most Elegantly Engraved

The De Forests and the Walloon Founding of New Amsterdam

A Northumberland County Bookshelf or A Parcel of Old Books, 1650-1852