This valuable resource provides marriage data for thousands of couples who married in Strafford County, New Hampshire, between 1630 and 1860-over 40,000 people are named. This two-volume set contains an additional ten years over the previous edition, plus many corrections to the original. The material has been gathered from town records, church and cemetery records, old newspapers, D.A.R. and Piscataqua Pioneer files, census records, private manuscripts, and published town histories. No information in these volumes has been taken from any previously published family genealogies which represent another potential source for marriages not found here. The marriages are arranged, first by the groom's surname, and then chronologically by marriage date. In addition to the names of the bride and groom, and the marriage date, the entries also specify (where known): the official who performed the ceremony, parentage, birth and death dates, the town where the marriage took place, as well as residences of the bride and groom. There is a list of area ministers and their locations. A small proportion of the marriages, perhaps ten percent, took place in southern York County, Maine, and northern Rockingham County, New Hampshire, but are included here because of the connection with the Strafford County families. Also included is a new, informative fullname index to brides.
1206 pages, 5.5x8.5, (1997), 2008, 5.5, x 8.5, paper, index, 2 vols., 1206 pp, Softcover, Heritage Books, Inc

Abstracts of the Probate Records of Strafford County, New Hampshire, 1771- 1799 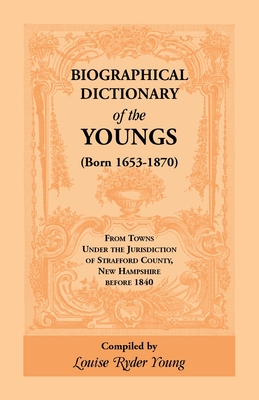 Biographical Dictionary of The Youngs (Born 1653-1870) From Towns Under the Jurisdiction of Strafford County, New Hampshire before 1840