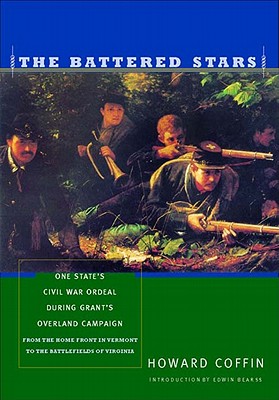 Grant's 1864 Overland Campaign from Brandy Station, VA, to Petersburg involved 100,000 men, 40-days, the battles of Second Wilderness, Spotsylvania Court House, and Cold Harbor, the Army of the Potomac, and a two-to-one casualty margin compared to the Confederates. Coffin weaves together stories of the participating military units, outlines the overall campaign, and gives voice to several hundred personalities on the battlefield and back home, primarily through diaries and letters. The family correspondence gives a glimpse into small-town Vermont life as well as life at the front.

Title: The Battered Stars: One State's Civil War Ordeal During Grant's Overland Campaign, from the Home Front in Vermont to the Battlefields of Virginia

Description: This extraordinary story of General Grant's overland campaign and the unique role played by the troops from the state of Vermont also includes never-before-published material on the experiences on the home front.
The Battered Stars is a new and unique contribution to the literature of the war between the states. Civil War historian Howard Coffin has unearthed never-before-seen archival sources to bring first-hand reports from the battlefields of Spotsylvania, The Wilderness, and many others. He also tells the story of the home front, taking us behind the lines to dozens of small towns in Vermont to show how the great battles of the Civil War affected the lives of ordinary citizens. Archival prints and photographs illustrate the extraordinary bravery at the battlefront and granite-like resolve at home that brought victory, but at a phenomenal price.

Orphan Train Riders: A Brief History of the Orphan Trail Era (1854-1929) with Entrance Records from the American Female Guardian Societyâ€™s Home for the Friendless in New York, Volume 1