Political History of Jackson County, Missouri : Biographical Sketches of Men Who Have Helped to Make It

By: Marshall and Morrison

This book seems at first glance to be purely a collection of biographical sketches (accompanied by photographs) of about two hundred citizens of this county, which lies on the west side of Missouri, about midway between the north and south ends of the state, containing Kansas City. On closer inspection it becomes evident that in between the photographs and their captions (typically a full page for each) there runs a history composed of chapters with headings such as Settlement of Jackson County, Organization of Townships, Political Episodes, Jackson County during the Civil War, The Democrat Split in 1900, County Officials, Kansas City's Early Development, Kansas City Since 1875 and City Officials. The publishers' aim in presenting this book was "to give a general review of the political conditions of the county, together with a register of officials which ought to be interesting and valuable for reference." Readers will learn how the first white man was said to set foot in Jackson County in 1787, but the first settlement was not until decades later, at Fort Osage. The county was thrown open for general settlement by treaty with the government in 1825. There is a description of the "Mormon War" and the events leading up to it. Civil War battles were fought on almost "every square inch" of the county. Most of the book, however, concerns political subjects and will be of welcome to anyone with an interest in political history. An everyname index containing about 1,500 names has been added.
276 pages, 5.5x8.5, (1902) reprint, 5.5x8.5, paper, index, 276 pp, Softcover, Heritage Books, Inc

Title: Political History of Jackson County, Missouri : Biographical Sketches of Men Who Have Helped to Make It

A Biographical History of Lancaster County (Pennsylvania): Being a History of Early Settlers and Eminent Men of the County 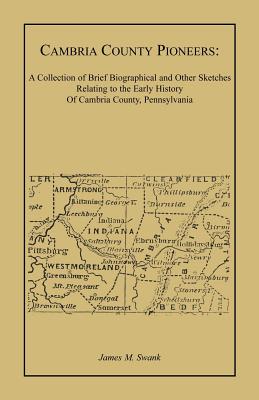 Cambria County Pioneers: A Collection of Brief Biographical and Other Sketches Relating to the Early History of Cambria County, Pennsylvania

Index of Part II Biographical Sketches from the History of Luzerne County, Pennsylvania