Missouri Genealogical Gleanings 1840 and Beyond, Vol. 8

This eighth book in a series includes information on counties covered in the previous volumes and also information on newly created counties. Census records for Missouri started in 1830, but many travelers and permanent settlers were missed in the census years or only lived in the state between census years. The purpose of this collection is to help the researcher pinpoint his or her ancestors between the census years. Missouri was the gateway to the West. Both the Santa Fe Trail to the southwest and the Oregon Trail to the northwest began at Independence, Missouri. Settlers and new immigrants from Germany, Switzerland, Ireland, England, Poland, Bohemia and Italy flooded into Missouri when statehood was granted in 1821. In the last half of the nineteenth century, more and more people flowed through Missouri on their way west to find gold. Kansas was part of the Missouri Territory until 1821, but it was not until 1854 that the territory of Kansas was created luring new immigrants and settlers from Illinois, Ohio, Indiana and Missouri. So many Missourians relocated to Kansas that in 1855 Kansas was voted into the Union as a slave state. Names appear here as written on the original records, including the abbreviations of given names. Sources include marriage records, hunting and fishing licenses, slave owners census, industrial census, obituaries, probate index, members of the Bar, pensioners, county officers, cemetery records, and others. "Miscellaneous Missouriana" includes a roster of the First Missouri Confederate Infantry; Kaskaskia Indian Treaty (1854); Miscellaneous Vital Records; Missourians killed in Vietnam; Missourians in the early census records of California, Oregon, Kansas Territory and Arkansas; and Missouri Executions (1841-1875). The following counties are covered: Andrew, Boone, Caldwell, Callaway, Carroll, Cass, Chariton, Christian, Cole, Daviess, Greene, Hickory, Iron, Montgomery, Newton, Nodaway, Ozark, Perry, Pettis, Platte, Putnam, Francois, Stone and Taney.
242 pages, 5.5x8.5, 2003, 5?x8?, paper, index, 242 pp, Softcover, Heritage Books, Inc 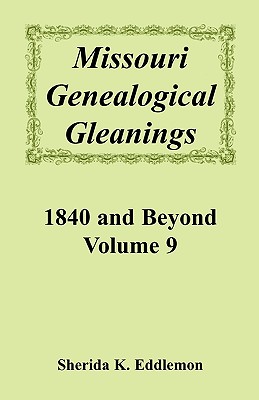 Missouri Genealogical Gleanings, 1840 and Beyond, Vol. 9 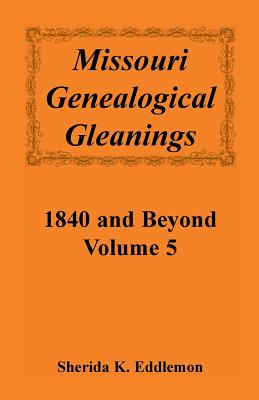 Missouri Genealogical Gleanings 1840 and Beyond, Vol. 5 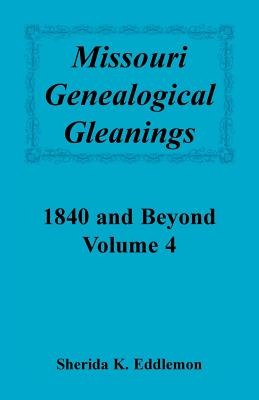 Missouri Genealogical Gleanings 1840 and Beyond, Vol. 4