Gorges and the Grant of the Province of Maine, 1622: A Tercentenary Memorial

The Tercentenary Memorial commemorated the three hundredth anniversary of the 1622 grant of the Province of Maine. "Accordingly, in response to their application, the Great Council of New England, August 10, 1622, granted to Sir Ferdinando Gorges and Captain John Mason all that part of 'the maine land in New England lying upon the sea coast betwixt the rivers of Merrimack and Sagadahock and to the furtherest heads of the said rivers and so forwards up into the land westward until threescore miles be finished from the first entrance of the aforsaid rivers,' which 'the said Sir Ferdinando Gorges and Captain John Mason, with the consent of the president and Council, intend to name the Province of Maine.'" "Rosier's Relation Of Waymouth's Voyage And Explorations" (1605), "The Popham Company Experiences" (1607-1608) relating their voyage to Sagadahoc, "Captain John Smith's Description Of New England," "Captain Thomas Dermer's Letter To Thomas Purchas" (1619), "The Brief Relation Of The Discovery And Plantation Of New England (1620): The Epistle Dedicatory To The Prince His Highness [Charles I]," and the "Grant of the Province of Maine" (1622) are included, and provide first-hand accounts of early encounters with Native Americans, trade, natural resources and much more. Illustrations enhance the text.
178 pages, 5.5x8.5, (1923) reprint, 5.5x8.5, paper, index, 178 pp, Softcover, Heritage Books, Inc

Title: Gorges and the Grant of the Province of Maine, 1622: A Tercentenary Memorial 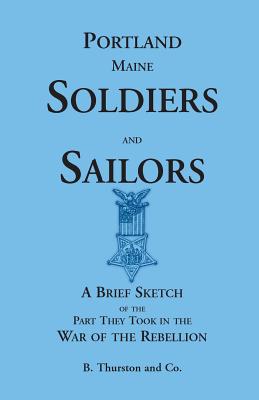 Portland Soldiers and Sailors, A Brief Sketch of the Part They Took in the War of the Rebellion

Eastern Maine and the Rebellion: being an account of the principal local events in eastern Maine during the war. And brief histories of eastern Maine regiments. Contains accounts of mobs, riots, destruction of newspapers, war meetings, drafts, Confederate raids, peace meetings, celebrations, soldiers' letters, and scenes and incidents at the front, never before in print

The Portland [Maine] Transcript, 1869-1870, News and Summary, Marriages and Deaths